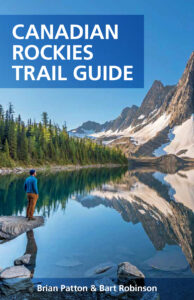 Summerthought is pleased to announce the publication of the 10th edition of the Canadian Rockies Trail Guide. We have been working on the new edition for over two years. As is always the case with a new edition, we have done extensive research by hiking as many trails as possible, but also had a huge amount of input from regular contributors as well as from Parks Canada, Alberta Parks, and BC Parks to ensure that the book remains the most comprehensive and update reference to hiking in the Canadian Rockies. In addition to updates, you will notice three major changes to this edition:

To mark the 50th anniversary of the Canadian Rockies Trail Guide we are offering free shipping within North America through this link on our website.